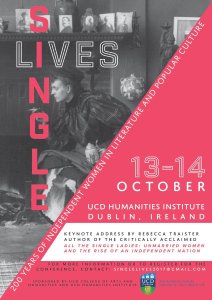 The Single Lives Conference was held at the Humanities Institute at University College Dublin in October 2017. The two-day conference gathered a broad range of international academics and explored the evolving phenomenon of the single women from the 19th century until the present-day. Literature and popular media by, about, and for single women were analyzed to discuss a variety of principal themes, such as race, sexuality, class, family, political movements, and labor. In recent years, there has been an increasing interest in singlehood, particularly in terms of what it means to be a socially, politically, and sexually active single person. As Singleness Studies take a firm hold in the academic field, this conference provided academics the opportunity to collaborate and exchange multiple disciplinary perspectives on single women.

“The Single Feminisms” panel focused on the recovery and revival of independent women in history, acknowledging and detailing their accomplishments. Panelists introduced individual single women, or previously overshadowed single women, in order to draw them into contemporary critical conversations, concentrating specifically on the contemporary circumstances of their (voluntary) singlehood and their cultural and political accomplishments. It is important to mark the plurality of feminism in this panel, as a range of critical approaches (literature, historical, psychological) were utilised.

“Troubled Houses: Rosamond Jacob and the Birth of Modern Ireland”

Emma Radley, assistant professor at University College Dublin, opened the panel with her talk on Rosamond Jacob, a woman who is often relegated to the status of a footnote in the history of Frank Ryan, an Irish socialist republican. Radley makes clear that Jacob was in fact much more than Ryan’s mistress; Jacob was an activist in her own right. In her diaries we see a struggle with the ideal of femininity, a writer conflicted with a tension between art and intellect, proper and improper. Jacob never married but confidently embraces her sexuality, describing Ryan “like a lovely big black cat” in a diary entry. Jacob documents this sexualized form of femininity and womanhood as “Other’ to the traditional Irish mammy in her 1938 novel The Troubled House. Radley further expands Irish history by tying in the oppressive nature of women’s experience in history to that in Irish mythology, specifically the Morrigan. A female warrior and liminal figure, the Morrigan is often overshadowed by her male peers such as Culcullan. Radley, however, is reshaping and expanding Irish history by justly bringing single women’s experiences into the picture. This is relevant to the Irish Women’s Writing Network, which aims to recover the lives and work of Irish women between 1880 and 1910.

“Singleness as a Choice: The Case of the First Estonian Feminist Lilli Suburg (1841-1923)”

Eve Annuk of the Estonian Literary Museum brings another feminist to the foreground, writer and journalist Lilli Suburg. Single by choice, Suburg made a series of very unusual choices in mid-nineteenth century Estonia. Annuk has come to understand Suburg’s character through her diary, which she kept for 30 years. In addition to the school Suburg established for free-minded young girls, she founded Linda magazine. This was the first feminist magazine in Estonia. It covered critical accounts of everything Suburg read, including the vast differences in progress for women between Estonia and America. In an 1891 essay titled “Marriage,” Suburg defended marriage based on mutual love, promoting equal partnership in which the binary gender spheres are deconstructed. Suburg also defended women like herself, who chose to remain single, noting the importance of their work in households and schools. Annuk comments on how Suburg was deeply criticized and mocked for her single feminism, gaining recognition for her actions at a much older age. The evolution of her social reception is clearly exemplified in Annuk’s discussion as Estonia’s public view of Suburg shifted from that of contempt to commemoration.

Deborah Gussman from Stockton University chose to focus her talk on Catherine Sedgwick, novelist, spinster, and observer of single womanhood. Gussman remarked on the significance of Sedgwick’s work to locate other values and roles for single women in order to deconstruct the stigma of singlehood. Sedgewick particularly achieved this through her 1857 novel about women outside marriage, Married or Single. Two of the primary female characters are Martha, an old maid who serves as a symbol of the cult of single blessedness, and Julia, a young singleton who dedicates her life to charity work. Gussman turns to the absence of race when discussing feminism as she tells of how Harriet Wilson specifically responded to Sedgwick’s work in 1859 with her own text, “Our Nig: Sketches from the Life of a Free Black.” Wilson conveys an abandonment storyline in which fallen women are devoid of any support and the only resolution posited is escape through death. Gussman clearly stressed the importance of intersectionality when discussing single feminisms.

“Single and African American in Antebellum America: Being an Activist without the Shield of Motherhood”

Susan Stanfield from the University of Texas, El Paso, highlighted the significance of African-American writers during the antebellum period, focusing on black women. She focused on the ways in which their work advanced and celebrated black womanhood, which challenged the notion of womanhood being associated with white middle-class women. Stanfield concentrated on two women: Sarah Forten and Sarah Douglas. Both women were leading figures in the African-American community as abolitionist activists and writers, publishing their work in various newspapers and magazines. Douglas also founded a girls’ school, offering higher branches of knowledge for young women. Both women amplified the black women’s voices, which contemporary scholars continue to do.

Have you an idea for a blog post? Attended a great conference? Starting a new research group? Want to share teaching experiences? Email Dr Deirdre Flynn.

Our Blog seeks to offer an overview of the latest developments through short 1000-word contributions exploring any aspect relating to Irish women writers at the turn of the twentieth century. If you want to submit an idea or reference our posts click here for more details

A Network for those researching Irish Women's Writing (1880 - 1920) Check out our website for our blog and resources! #IrishStudies #ReadWomen #IWWNpostgrad

I feel members will have lots of suggestions for you!

@DaraD22Gothic this seems right up your street!

Actual work question, looking for 18th/19th century ghost stories that play with Time, preferably by and/or about women. Is one of you the premier expert on the topic or know where best to look?!

We have a funded PhD studentship in applied drama/theatre in Ireland to work with me @dramatheatremic commencing Autumn 2022. Stipend of €6,900 PA + fees for 3 yrs. Holder will contribute to teaching. DM with questions or for further details #Research #AppliedTheatre #Ireland

We use cookies on our website to give you the most relevant experience by remembering your preferences and repeat visits. By clicking “Accept All”, you consent to the use of ALL the cookies. However, you may visit "Cookie Settings" to provide a controlled consent.
Cookie SettingsAccept All
Manage consent

This website uses cookies to improve your experience while you navigate through the website. Out of these cookies, the cookies that are categorized as necessary are stored on your browser as they are essential for the working of basic functionalities of the website. We also use third-party cookies that help us analyze and understand how you use this website. These cookies will be stored in your browser only with your consent. You also have the option to opt-out of these cookies. But opting out of some of these cookies may have an effect on your browsing experience.
Necessary Always Enabled
Necessary cookies are absolutely essential for the website to function properly. This category only includes cookies that ensures basic functionalities and security features of the website. These cookies do not store any personal information.
Non-necessary
Any cookies that may not be particularly necessary for the website to function and is used specifically to collect user personal data via analytics, ads, other embedded contents are termed as non-necessary cookies. It is mandatory to procure user consent prior to running these cookies on your website.
SAVE & ACCEPT